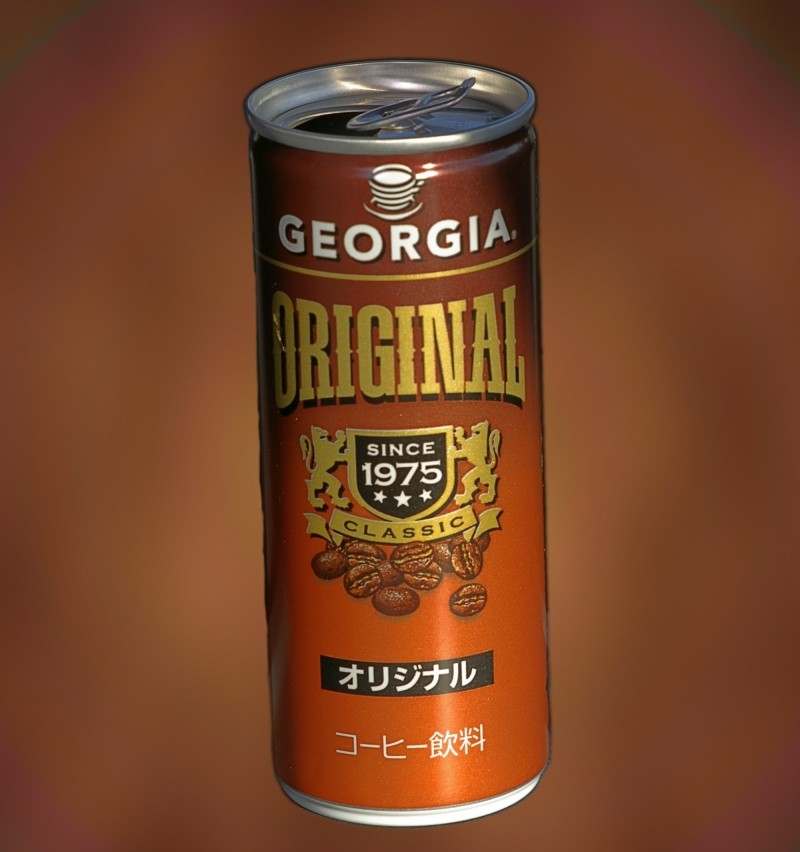 When I first arrived in Japan one of the things I noticed while staring wide-eyed out the bus window en route to the USN base at Yokosuka was a number of vending machines with the logo for something called Georgia. Subsequent investigation revealed that Georgia is a brand of canned coffee, served in a 250ml can.

At the time, the idea of canned coffee was an entirely new concept to me. While it was new to me and brands were few back than, these days I take it for granted and there are more brands, flavors, blends, and can shapes than you can shake a stick at. But while each year many come and many go, as the can proudly proclaims Georgia (product of the Coca-Cola company) has been plugging steadily and steadfastly along since 1975.

Mike, I always find myself buying canned coffee, especially on cold days waiting at the train station. Every time a company releases a new variety, I have to try it. Have you noticed that no matter what the blend, company, whatever, they all taste exactly the same? What's even stranger is that, despite all the above, I actually strongly dislike canned coffee. I buy it in the hope that one day, one of them really will taste like coffee.

@Daroru: Don't you hate it in the winter when you accidentally press the button for a cold can instead of a hot one?

Great colors on the can! I love the story behind it.
Is is any good?

@Jen: It's so-so. The most remarkable thing about it is that it is still around after more than three decades. There is a simply stunning amount of new product turnover in Japan's beverage industry, with many products not lasting more than a year or two.

I'll be perfectly honest and admit I don't really care all that much for coffee in general or canned coffee in particular. The prime reason I get canned coffee instead of a fizzy carbonated drink is that I chew tobacco and the coffee cans, being made of steel instead of aluminum, make superior ad hoc cuspidors.

I bet than nothing beats real coffe, but when in need, open up a canister, good foto for an advertisment!

@Dimitrios: Thank you. I really shouldn't have posted such an overly modified image, perhaps. But I was using the image to learn some new techniques in The GIMP and I couldn't resist the urge to post my first ever successful use of a layer mask and a couple of other things.