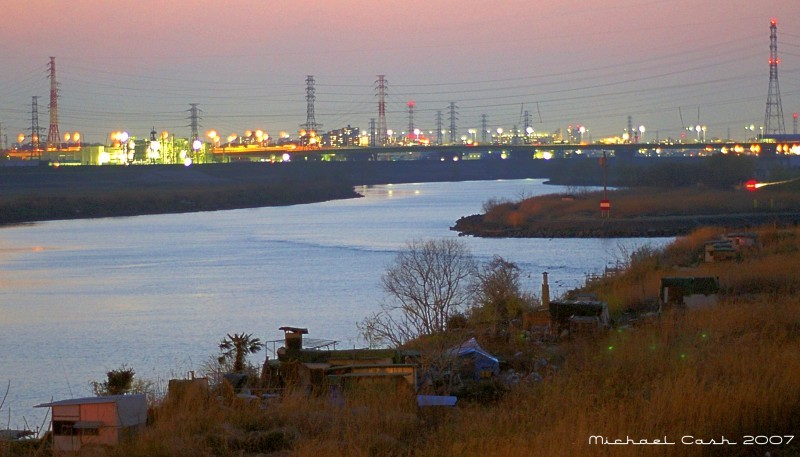 Posted by Mike Cash (Kiryu, Japan) on 29 March 2007 in Landscape & Rural and Portfolio.

A view of the Arakawa River, which marks the boundary between Tokyo and Saitama Prefecture. Tokyo is on the left side of the photo and Saitama on the right. In the foreground are shelters built by homeless squatters who eke out a Grapes of Wrath existence on the edges of society, along the edge of the river along the edge of one of the most prosperous cities in the world.

The industrious homeless squatters who choose to make the effort to construct their own shelters along the river bank generally aren't subject to the same sort of official rousting received by those who choose to live in the heart of the city and sleep beneath overpasses in cardboard boxes. Part of the reason is "out of sight, out of mind". The rest of the reason, I suspect, is that they are living on a flood plain between the normal banks of the river and the high levees which line the river. In the spring and summer, there is an almost 100% certainty that the monsoon season will provide them with at least one torrent which will place their shelters under water, and perhaps wash them down to the sea.

First I'd like to say that the picture is beautifully composed, the exposure is just perfect.
Second, how incredibly sad it is that they live like that. The same thing happens here in the states and I feel it is a true waste of human life and potential and sad that we as a society cannot find a way to solve the epidemic of homelessness and poverty. I'll get off my soapbox now.
Nice image Mike, thank you for sharing both the image and the story.

wonderful image Mike. its a most effective piece of photo journalism and your description is very moving. Good luck to each and everyone in situations such as this.