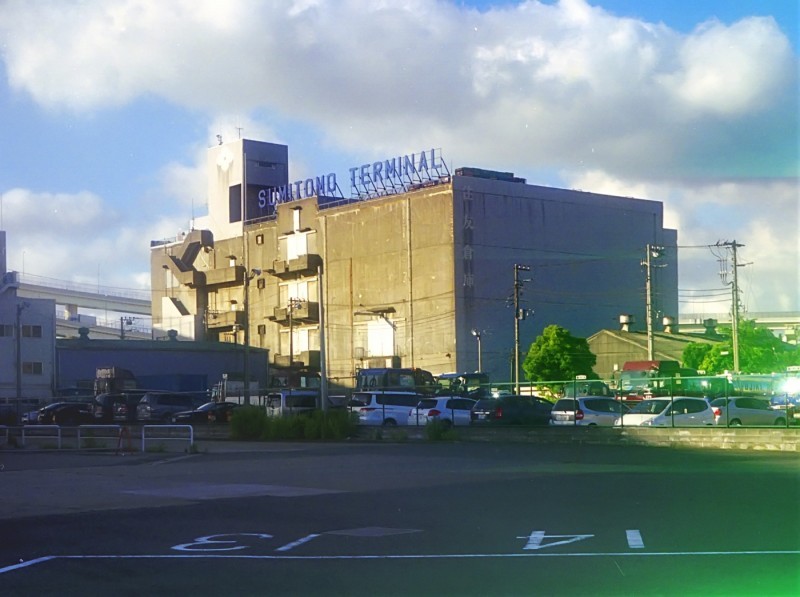 Posted by Mike Cash (Kiryu, Japan) on 9 June 2007 in Architecture and Portfolio.

Not a very good image, but it is the first one from yet another "new" camera and my first post of an image shot in medium format. It is a warehouse on the "A" pier at Yokohama's Daikoku Wharf.

The camera is a 1956 Aires Reflex YII TLR (twin lens reflex). The company was active shortly after WWII and went bust a few years after this camera was made. Like all medium format cameras of that era, it lacked a frame counter. On medium format, this wasn't a problem as the film has a backing paper with frame numbers marked on it. One looks through a window on the back of the camera and aligns the frame numbers when advancing the film with a knob.

Although red windows are the norm (black and white film at that time being very insensitive to the red spectrum, and color film for the masses still just a dream), for some odd reason this camera has a green window. using 400 speed film (also a dream at the time) and opening the slide covering the window when advancing the film while outside in bright sunlight introduced horrible green washed out areas on the film. Even though I trimmed the image drastically to reduce it, you can still see vestiges of the green burn-through on the picture.

This was from the first roll of film I put through the camera, and very likely the first film it had seen at all for at least 20 or 30 years. I learned quite a bit from shooting that first roll and have high hopes for subsequent film, as I have decided to abandon the green window and just advance the film by counting the rotations on the advance knob.

Even though the 50+ year old uncoated lens doesn't produce stellar images and despite the other shortcomings the camera has, it has been a lot of fun to take out and play with. It certainly has been well worth the three bucks I paid for it and the few squirts of lighter fluid it took to get the sticky shutter release in something resembling working order.

@Jen: Thanks. I'd be happy to type it up even if I thought you were the only one who would see it. (And on this particular awful image, I think maybe you were!)