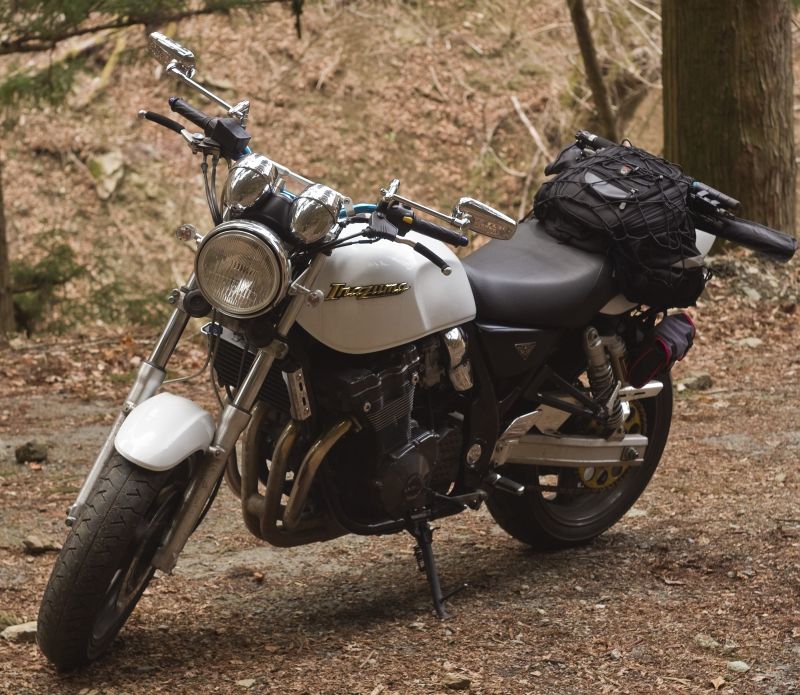 I had motorcycles from age 12 until 20, then had a 25 year blank. For twenty years I said, "Next year, I'm going to get a motorcycle again." Well....next year finally got here.

One day in February as I was preparing to go out my wife asked me where I was going.

"To look at motorcycles."

"What?! Are you going to buy a motorcycle?"

"I've been telling you for twenty years I'm going to buy one. What the hell is so sudden about that?"

It is a '97 Suzuki GSX400, and has a six-speed transmission. I recently had it up to 70kph in second gear and still had about 4000rpm to go until the redline.

I have no idea what the other four gears are for.

Good skills Mike, the more I sit in traffic the more sense a motorbike seems to make. Just be wary of the ignorant and unobservant in their protective steel cocoons!

I suppose that's about as far from a truck cab as it gets and still has a (practical) motor.

@JOhn W.: Interestingly (or maybe not), tractor-trailer drivers here seem to favor the small kei cars for commuting. In my company quite a large percentage of the trailer drivers also ride motorcycles. I suppose we get that urge to drive something huge out of our systems at work.

Good move Mike; looks nice and clean, and will get you into those interesting spots that are a little off the beaten track. BTW, the other gears are for losing your licence, scaring people in cars, things like that.

@Dan: I also learned during the last day of Golden Week when I encountered about 40km of expressway traffic that such numbers are largely irrelevant to motorcycles. I must have passed well over a thousand cars as I zipped through them like a hot knife through butter.

Thanks for the info on the other gears; the thing didn't come with an owner's manual so I never would have figured it out otherwise.

@RBL: Very nice of you to say so, but it wasn't intended as anything more than a snapshot. I had been riding it about a month and I noticed I had yet to take a picture of it. Figured I had better do it before it gets stolen.