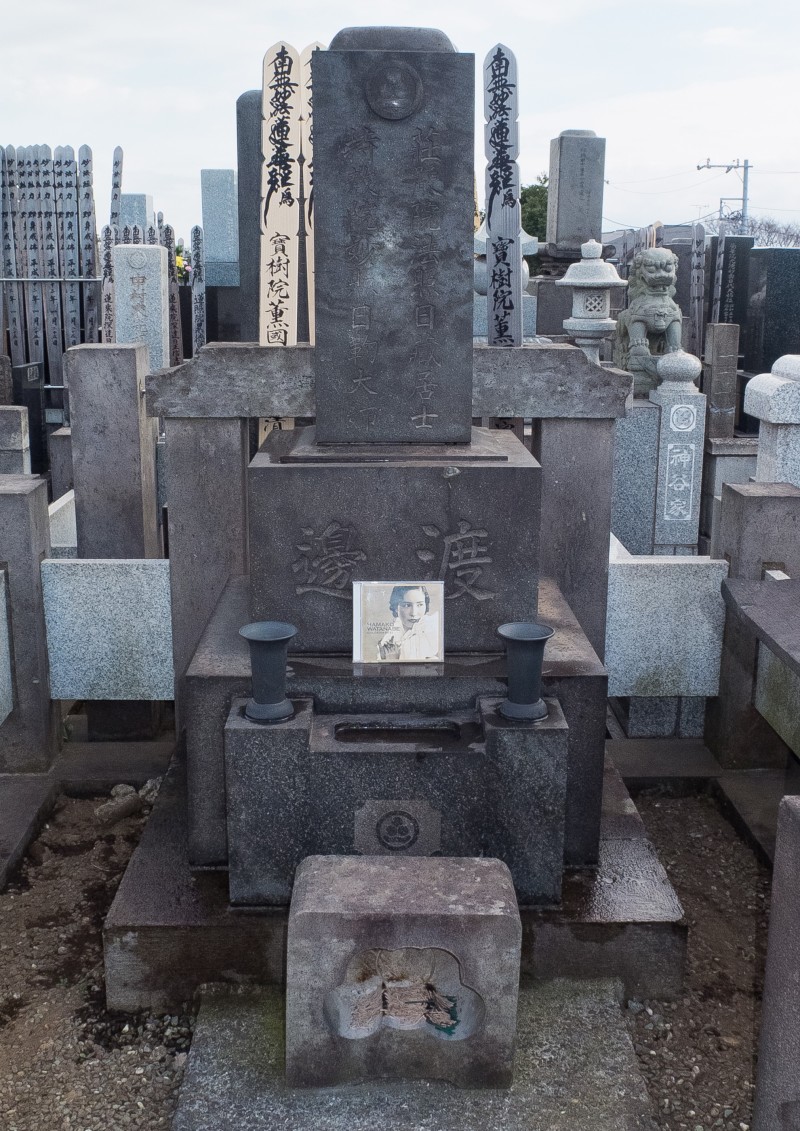 Posted by Mike Cash (Kiryu, Japan) on 4 January 2012 in Documentary & Street and Portfolio.

From a visit to the tomb of singer Hamako Watanabe (1910-1999). She was most active from the early 1930s through the mid 1950s and was one of the best known and loved singers of her era, although she has sadly dropped from the collective conscious and Japanese around age 60 might reply "I've heard the name." if you mention it. People younger than that haven't heard of her at all.

One of her songs played a key role in securing the release from the Philippines 108 Japanese soldiers who had been sentenced to death in the aftermath of World War II. One of the prisoners penned a bluesy song about their plight, which was then recorded by Hamako. When President Aquino heard the song he was moved to commute their sentences and return the prisoners to Japan.

A life with a career as a major recording star, extensive travel visiting and performing for the troops, playing a key role in saving 108 lives.....at the end of which she is a simple short inscription on an unpretending stone in a plain tomb at the far back corner of an unremarkable cemetery on a hill.

Even finding out where her grave is located involved some rather extensive Google searching. There is no direct mention anywhere on the internet of where the grave is. I had to piece together clues from several different places. Almost maddeningly, the very first search revealed a photo of the tomb, yet with no indication of where the tomb is located except that it is "not far from where she lived". I knew she lived in Yokohama, but where in Yokohama? The photo made it look like a sure bet the cemetery was one attached to a temple rather than a public cemetery and there are a lot of temples in Yokohama. I was doing all sorts of searches on her name and other search terms, hunting for some casual reference to what area she lived in. I finally found a couple of photos showing some landmarks "near her home" and then hit Google Maps and started looking for any and all temples in the area. Fortunately the area was not too packed with temples and I was able to narrow it down to a couple of possibilities. I figured doing a search on her name together with a specific temple name was going to be a million-to-one long shot, but I tried it anyway....and it paid off. I hit the one and only page anywhere on the internet that makes mention....casual and almost gratuitous mention....of her family being attached to that particular temple and after a few hours of digging finally had the temple and cemetery narrowed down.

The one photo that is on the net of her tomb, on the blog of a young actress who was in a production playing the role of Hamako, showed me that the tomb was bordered by a fence of a rather uncommon construction so I was confident I would be able to spot it amongst the hundreds and hundreds of seemingly identical tombs. Thanks to clues from shadows in the photo and from some trees in the background I was actually able to go almost straight to it.

Due to a conspiracy of circumstances, I was unable to come up with any flowers. Families usually do grave visits around New Years in Japan, plus Hamako passed away on December 31st, so I figured chances were high that there were already flowers there. I made the trip on my motorcycle (about eight hours round trip, sub-freezing temps for some of it) and figured it would be best to get flowers in Yokohama rather than hauling them down from Gunma in saddlebags. What I didn't figure on was that all the flower shops would be closed when I got there.

Interesting story, Mike, but what's missing is what prompted it.... how did you come to know of her?

I used to record the show by hooking up a radio to my computer and running an audio recording program on a timer. Later on I would separate out individual songs. She being a major artist of her era she quite naturally came up. I liked several of the songs. In 2010 there was a special two CD compilation of her best songs released in commemoration of the 100th anniversary of her birth in 1910, and wanting something of better quality than what I had snagged off of AM radio, I bought it.